Of all the U.S. National Parks, one I never really expected I’d ever visit is Hot Springs. But expectations seldom mean much, and family connections brought me to central Arkansas this June, determined to see and enjoy this rather obscure and idiosyncratic National Park.

Hot Springs is hardly a wilderness park, but it does encompass several forested mountains, relatively undeveloped by local standards. To see a bit of the park’s backcountry, I was up and at a trailhead an hour before sunrise. 88 degrees and 95% humidity at 5:00 in the morning is rough going for a high desert dweller like me, and hiking these forests in the summer inspires a lot of respect, sympathy and a little horror for the lives of the native Americans and early settlers who inhabited these parts.

A couple miles on a lightly used trail, liberally laced with spider webs, brought me to Balanced Rock, an outcrop of boulders that provided a focal point and a view of the surrounding woods. The boulders are made of Arkansas novaculite, an attractive, hard, pale rock that reminded me of the beautiful quartzites in Idaho’s Lemhi Range. The geologic map of this region is fascinatingly convoluted with lots of impressive folding, and these mountains would be a wonderful geologic playground were they a little less afflicted by trees.

The balance point of Balanced Rock:

The hike out in peaceful morning solitude was graced by a tortoise and some beautiful flowers (identification welcome!):

Those big geologic folds funnel water down into the earth and send it back warm to the surface. Hot Springs was originally preserved in 1832, the first time the U.S. federal government took action to protect a natural resource. In the late 1800s, almost all of the springs were capped and diverted into bathhouses, and Bathhouse Row forms the core of the park. A couple small springs are still permitted to flow above ground a little, but one can only imagine what this hillside once looked like with dozens of streams of warm water cascading down to the now buried creek. 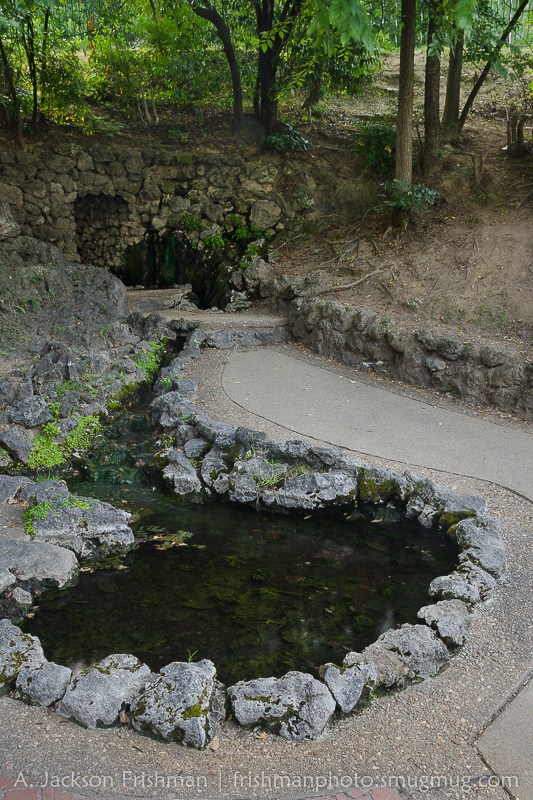 The historic buildings of Bathhouse Row are interesting and mostly attractive, though some of the more monumental and institutional architecture is definitely a product of its time. The Rehabilitation Center (below) and the Arlington Hotel are enormous and rather looming. The former was used to provide spa treatments to U.S. soldiers, and the bathhouses offered many early attempts at physical therapy, some of which were likely ahead of their time, while others make one happy not to have lived 100 years ago.

In its time, Hot Springs was a popular destination for the well-heeled (including Al Capone and the Mob), and it has some nice examples of early 20th Century opulence. For instance, the Edwardian parlor in the Fordyce Bathhouse (which is now the Park visitor center):

Blooming magnolias and a painted facade:

Hot Springs is certainly an unusual member of the National Park system, but it has plenty of historic and natural interest, and I’m glad to have had a chance to see it.