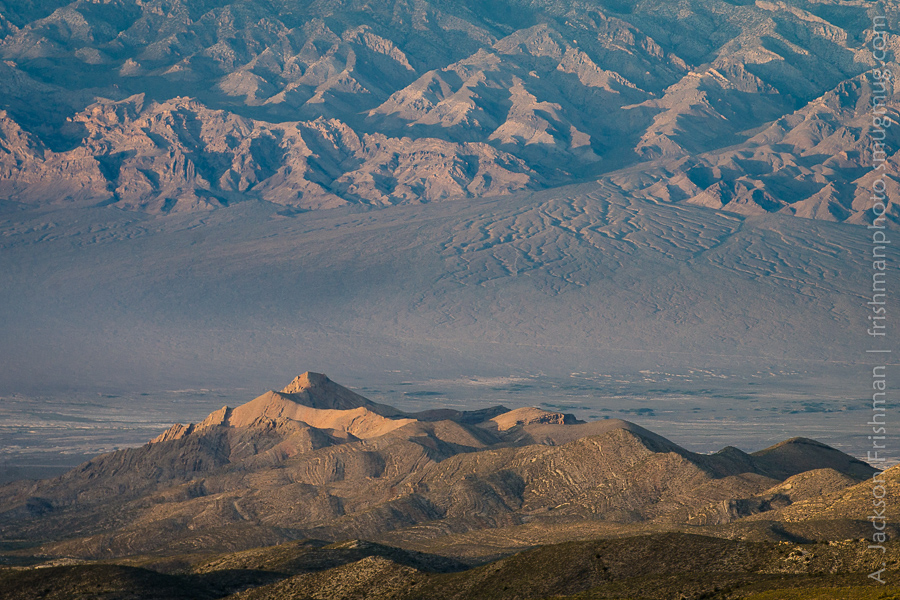 The Desert National Wildlife Refuge in southern Nevada is the largest refuge in the contiguous U.S., but it stands to get a great deal smaller. Nellis Test and Training Range is proposing to take over 227,000 acres of Desert NWR (as well as quite a bit of other public land), with public access to be eliminated, for the purpose of fancier training scenarios with live bombs. The Refuge’s elevation range encompasses seven plant life zones, from the Mojave desert floor ecosystem up to ponderosa and bristlecone pines at its upper elevations. In addition to its iconic bighorn sheep, it protects habitat for 53 species of mammals, 30 species of reptiles, 250 species of birds and 500 species of plants. It is almost entirely in primitive condition, with 88% of its acreage recommended for wilderness by the U.S. Fish and Wildlife Service. Nellis TTR already encompasses 2.9 million acres, a larger area than any contiguous wilderness complex in the Lower 48, and they have overflight access to much more. In a time of expanding population and development in Nevada, when the state is attempting to diversify its economy with an emphasis on outdoor recreation, when nearby recreational areas such as the Spring Mountains, Red Rocks and Death Valley are seeing soaring visitation numbers, this landscape’s scenery, solitude and biodiversity are more valuable than ever. The Desert NWR’s status as a Refuge should be upheld and continued intact.

If any readers agree with me, now is the time to help! Please offer a comment on the legislative EIS by December 10th. Comments are by far the most effective way to influence this process – this is the gauge of public sentiment which will be incorporated into the information that will ultimately go to Congress. Your comment can be simple (“I want to see Desert National Wildlife Refuge continue to be managed for ecological values with open public access.”), or you are welcome to repurpose language from my comment below. If you’d like to do more, please consider a donation to Friends of Nevada Wilderness, which currently has a generous gift matching offer.

A distant view into the 2.9 million acres of off-limits military land on Nellis TTR (click to enlarge)

I am writing to express my opposition to the proposed NTTR Military Land Withdrawal. Specifically, I wish to support Proposed Alternative #1 (Extend Existing Land Withdrawal and Management of the NTTR, North and South Range). If that alternative should prove unworkable, I support the No Action Alternative.

In particular, I am strongly opposed to any land withdrawal that would result in loss of public access to currently open lands on the Desert National Wildlife Refuge. As a hiker, photographer, and amateur naturalist active in southern Nevada, the lands proposed for withdrawal offer me unique and irreplaceable opportunities for recreation and study in the region. Locations such as the Sheep Range, Hidden Forest and the Alamo Road contain a diversity of scenery and ecosystems which do not exist in similarly primitive condition elsewhere in southern Nevada. Hayford Peak, by virtue of its more than 5,000 feet of topographic prominence, is an important summit to the mountaineering community, and under the proposed withdrawal it would become the only such “ultra-prominence peak” in the Lower 48 to have no legal public access.

The elevation range, geology and biodiversity of the western portion of Desert NWR have no equivalent in similarly undeveloped condition in the region. Nearby recreational areas such as the Spring Mountains, Red Rocks, Death Valley and Lake Mead are already overcrowded and experiencing major management challenges, dramatically increasing visitation and resource degradation. NTTR has already withdrawn substantial lands and closed public access to a large portion of the Desert NWR’s original territory. In a time when Nevada is actively promoting and developing its outdoor recreation economy, loss of public access to an additional 300,000 acres of high quality landscape is simply unacceptable.

Also of concern is loss of public access and oversight to the archeological and historic sites in the lands proposed for withdrawal. Maintaining unlimited access for scientists and wildlife managers is likewise a vital concern.

I also believe that the regional context of military lands argues against further land withdrawal. Military lands without public access are enormous in the region. Between China Lake, Fort Irwin, Edwards, Twentynine Palms, Nellis, Hawthorne, Fallon and Utah TTR, recreation and natural landscapes in the Mojave and Great Basin desert ecosystems are already heavily impacted by military lands. This point only becomes stronger when one considers Fallon Naval Air Station’s current proposal to withdraw another 600,000 acres in Nevada. Nellis already has 2.9 million acres withdrawn (an area larger than almost any Federal wilderness area in the contiguous U.S. and approaching the size of Nevada’s total designated wilderness acreage), as well as flyover access to much more. I believe it is reasonable to expect the highly competent and professional leaders of our military to achieve their training goals on existing land withdrawals via increased innovation, more efficient use of existing withdrawals and better cooperation between military branches.

Furthermore, population and development in Nevada is rapidly expanding, causing major increases in impacts to desert land via urban growth, growing demands on water resources and solar energy infrastructure. All this comes at a time when residents and tourists are visiting Nevada’s backcountry in unprecedented numbers and the state is attempting to diversify its economy with a substantial emphasis on outdoor recreation. In this context, ecologically healthy land in undeveloped condition is more important to the public than ever.